Phil and I were both excited to be heading off to the remote destination of Pulau Weh, a volcanic island to the northwest of Sumatra in Indonesia. This GS-Diving trip also included Jo, Lydia, Marla, Hongbo, Mo and Wong, with Gary Savins in charge.

After 2 flights; Singapore to Kuala Lumpur, then onwards to Banda Aceh and a ferry ride, our sleepy group were then driven by coach through mountainous vegetation and lush rainforest to the tranquil resort of Pulau Weh.

The first evening some of us were preparing our cameras excitedly, then Hongbo produced his huge camera housing, which Gary dubbed ‘the mini-submarine’. We all gasped with delight, when he saw his underwater photos the next day.

Also, on the first evening we had an unexpected visitor – a cute, stray dog which we called ‘ itchy’, ‘scratchy’ and ‘dog’ who seemed very pleased with all the attention he received. 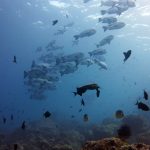 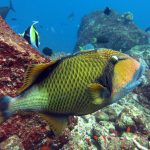 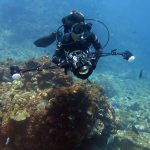 The wooden dive boat took us to Seulakoe Island and Tokong dive sites, where underwater we saw a rainbow of colours from different shoals of fish – sweetlips, cardinalfish, anemonefish, damelfish, surgeonfish and huge parrotfish. There was something for everyone to look at, take photos of or just hover and admire.

There were also plenty of moray eels hiding shyly under rocks, surrounded by banded shrimps. Several times you had to look twice at the stone fish and crocodile fish, who were so well camouflaged. But it was the several octopus that generated lots of interest and could transform from black to speckled grey to white in seconds. Mo got some great film footage of both but especially of a huge honeycomb eel.

A couple of times we came across the Titan Triggerfish but luckily it wasn’t nesting season and they were too busy rummaging around to notice any nuisance divers. Still I noticed that everyone kept well away from them, Gary included. With all the excitement Phil got low on air and luckily the dive guide was able to provide a spare tank underwater so he could continue.

We returned to different areas of Seulakoe Island and Tokong and were in for a dazzling display of fish life. Shoals of angelfish, triggerfish, trevallis, fusiliers, sergeant majors were swimming around the reef in all directions. We all agreed that this had probably been the best diving we had done in Asia, on a level with Sipadan, Malaysia.

In the evening, over a bit too much red wine, Jo and Lydia started giggling about the dives. Yet the next day, they were both bright and alert, ready for another day’s diving. Lydia put it down to her Russian genes.

After a heavy downpour in the morning, we were hesitant about another dive due to lower visibility. The dive guide promised us a macro, easy dive then changed his mind when we got on the boat. This became an adrenaline “resort’s most challenging dive” and it certainly lived up to its name. We were dropped into the blue. While descending, at 31 metres there was still no sign of a wall or the sea floor. As the current was strong and like a washing machine, I ended up swimming and panting behind. It felt like a tricky swim through streams of lemonade, so I was relieved when I caught sight of the wall.

We were thrown by the current over a fast moving wall. Poor Hongbo carrying his mini-submarine was sick in his regulator.

Looking up there were 2 manta rays. Then turning around a corner for shelter, I was greeted by a peaceful turtle who looked at us all curiously.

For our last dive the boat crew took us to an underwater hot, volcanic spring. There were holes in the sand where jets of warm bubbles were constantly streaming, much to the interest of some yellow fusiliers. Marla looked very comfortable in one of the holes, as if she didn’t want to move for the rest of the dive. The local dive guides then fed some puffer fish with sea urchins, which I had mixed thoughts about.

One of the local dive guides had brought a bag of damp, black volcanic sandy paste onto the boat. We all had great fun smearing it on our faces and body as it was warm and felt great for the skin.

As we made our way back to Singapore we had a few hours to spare in Banda Aceh so we visited the Tsunami Museum. Luckily, Wong could speak the local language which really helped us.

Overall, it had been a fantastic and fun holiday and I would recommend anyone to visit the pretty island of Pulau Weh for some fantastic diving – it is definitely worth the 14 hours travelling.

Photos by Georgie. Additional photos can be located on her FaceBook Page – here